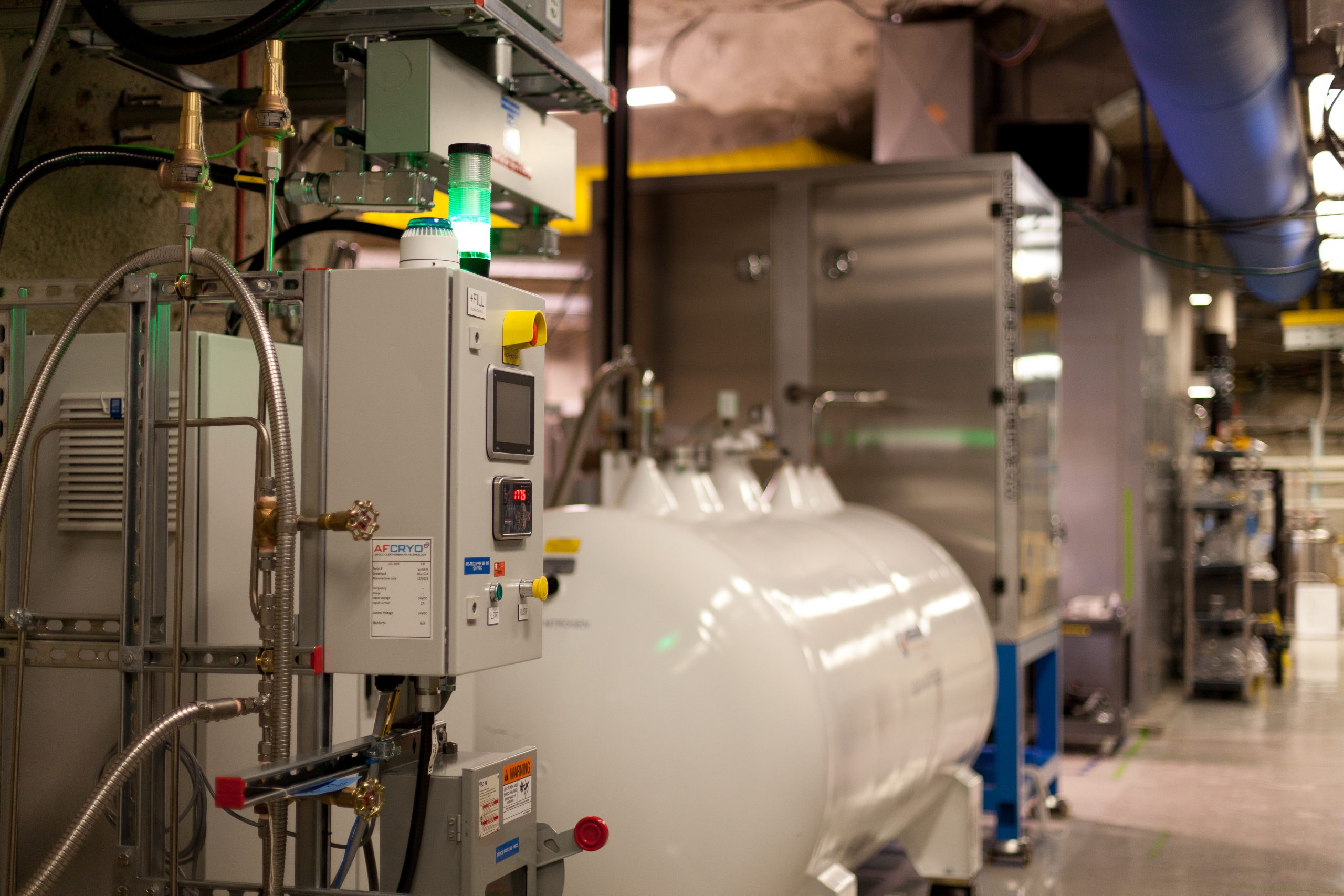 The SNOLAB team achieved a significant milestone this past week. Three years after investigations about feasibility began, a plant to produce liquid nitrogen (LN2) is now installed and running in the underground lab. This achievement is the result of years of planning and hard work by nearly every team involved in the underground and surface operations of SNOLAB. Said Steven Back, Operations Engineer for the project, “This impressive accomplishment means SNOLAB now has on-demand LN2 underground, ensuring continuous access to its current and future science program.”

Many experiments hosted at SNOLAB use LN2 – some to maintain the cooling necessary for detectors to operate, others as a high-purity inert cover gas (used to maintain constant pressure in large detector vessels and provide a barrier between the detector medium and lab environment). The ultrapure water (UPW) plant in the lab that provides UPW for many experiments and cleaning also requires LN2 as part of the purification process. Additionally, next-generation experiments that operate at cryogenic temperatures will have higher liquid nitrogen demands as they become operational.

Historically, all liquid nitrogen used in the underground lab had to be shipped underground from a large tank that was maintained on surface. Current usage is about 2000L per week, shipped underground in 230L dewars. During the shipping process some of the nitrogen is lost to boil-off, and as with everything entering the lab each dewar has to be cleaned. In addition to reducing the labour required to ship liquid nitrogen to the lab having an operational plant underground frees up valuable space on railcars for experiment components and other supplies.

The plant itself consists of a 3,000L dewar, a nitrogen generator, an air compressor, and a cryocooler, all of which were manufactured in different parts of the world. Compressed air is fed into the nitrogen generator (lubricated with distilled water to avoid any oil or dust being released into the air), which then scrubs the air of everything except nitrogen and argon. The air compressor from Atlas Copco originated in Belgium, while the nitrogen generator from Holtec had the shortest trip, coming from the US. Coming out of the generator, the nitrogen in the system is 99.998% pure. The cryocooler, which transforms the nitrogen from a gas to a liquid, was manufactured by AFCryo in New Zealand and shipped via the Panama Canal and then travelled across Canada by train. The liquid nitrogen is then stored in the 3,000L dewar which was manufactured in the UK and custom designed to ensure smooth shipping to the underground lab.

Given where the LN2 plant is set up in the lab, there are two delivery routes for experiments that use it. Due to its location area, liquid nitrogen will be hard-piped to the low background counting area and the SNO+ area. This means that the germanium counters and SNO+ will have a constant supply of LN2. For all other experiments the process is a lot like filling your car with gas: bring over a portable dewar, fill it up at the plant, and transport it to wherever you need to use it. Experiments no longer have to wait on shipments of liquid nitrogen to arrive underground.

Nearly every group at SNOLAB played a role in achieving this major facility milestone. Prior to acquiring the system, the engineering group did a seismic study on the LN2 system to make sure it could withstand the seismic activity profile of the lab. Designers created a model of the system to place within a 3D model of the lab to ensure it would fit as expected. The electrical team designed the power feed so that system usage can easily be monitored. The scientific support team did a full study on the potential oxygen deficiency hazard posed by the plant, and recommendations were implemented into the system to ensure safe operations. SNOLAB scientists provided input on what the LN2 needs of the various experiments and users are.

Once the plant components began arriving on site, the warehouse and underground tramming staff were instrumental in getting each piece delivered safely to the lab. Cleaners ensured each piece was clean prior to entering the lab after what was in some cases a round-the-world journey. The integration team was responsible for actually installing the system and tying it into all of the necessary lab systems. IT ensured that the system was connected to internet and communicating with the building automation system. Mike Hood was the project coordinator, overseeing every step and ensuring the process unfolded smoothly. Hood credits the work done by SNOLAB staff, saying, “The expertise and dedication of SNOLAB’s staff are the main reasons we saw such a smooth and successful delivery of this project.”

“The completion of the plant itself is a big milestone and the way this plant sets us up for success in the future is incredibly exciting,” said SNOLAB Director of Operations Allan Barr. “Not only does this remove the logistical demands of shipping liquid nitrogen underground, it helps to expand our expertise in cryogenics which is a key requirement for the bulk of our future experiments.” The installation of this plant and the additional capacity it brings positions SNOLAB well to host next-generation experiments with greater cryogenic requirements.