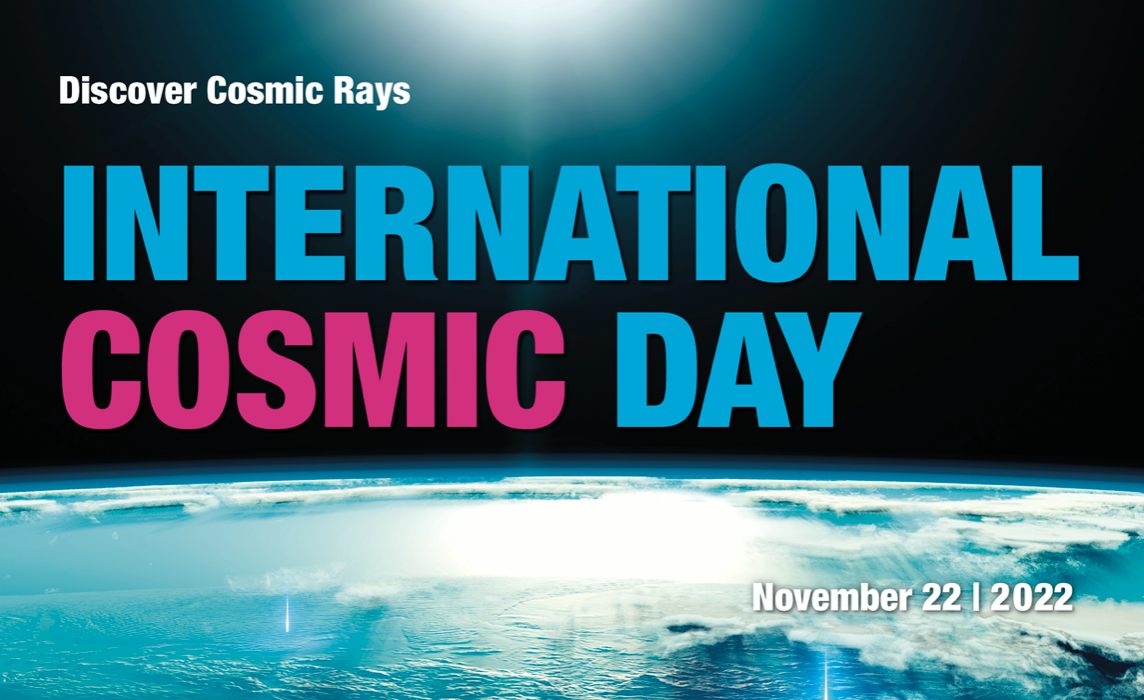 Each year in November, a celebration of cosmic ray particles takes place around the globe – International Cosmic Day (ICD). This global science outreach initiative, now in its 11th year, is devoted to the exploration of cosmic rays.

The detection and analysis of cosmic rays, once exclusive to high-energy physics, is now accessible to students through low-cost detectors and data made available from experiments and institutes. During ICD, students, teachers, and scientists come together to investigate cosmic rays. High-school students from around the world learn about cosmic rays, discuss results, and work like an international scientific collaboration over the course of the day.

What are cosmic rays?

Cosmic rays are high-energy particles that originate from the cosmos, which is the universe around us, including our solar system! Despite the term ‘ray,’ cosmic rays are actually particles. This term was originally coined when it was believed that cosmic rays were a form of electromagnetic radiation.

There are two categories of cosmic rays: primary and secondary. Before cosmic rays reach the Earth’s atmosphere, they are considered primary cosmic rays. Primary cosmic rays consist mostly of the nuclei of atoms – with about 90% being a single proton (hydrogen nuclei), 9% being alpha particles (helium nuclei), and the remaining nuclei are for elements up to lead. Primary cosmic rays are created by a variety of sources, including our Sun and supernova explosions.

Due to the high speed and energy of primary cosmic rays they can be dangerous to people and materials. Fortunately, here on Earth, we are protected from them due to the Earth’s magnetic field and atmosphere. As primary cosmic rays zip through our atmosphere they slam into atoms creating a shower of secondary particles that include muons. Travelling at close to the speed of light, muons shower Earth from all angles. If you hold out your hand here on Earth’s surface it is harmlessly hit by about one muon per second. These particles can pass through hundreds of metres of solid material before they are absorbed. By going 2 km underground to SNOLAB, cosmic ray particles are reduced by a factor of 50 million making the facility the best place in the world to study particle interactions.

The northern and southern lights

You may have heard of, or perhaps seen, the spectacular northern lights (aurora borealis) or southern lights (aurora australis). This phenomenon is created by cosmic rays! The interaction of charged cosmic rays from solar flares with the Earth’s magnetic field creates a dazzling light display. The different colours seen in the sky are dependent on the composition of the gases in Earth’s atmosphere that are being interacted with as well as the altitude of the interaction.

About Cosmic Rays Live at SNOLAB

In partnership with the Cosmic Rays Live outreach initiative at the Laboratori Nazionali del Gran Sasso (LNGS), SNOLAB is developing a new outreach program using a series of Cosmic Ray Cubes (CRC) that function as muon telescopes to detect muons arriving on the Earth’s surface. These instruments allow people to see the rain of particles produced by the interaction of cosmic rays with the atmosphere.

Learn more about the northern lights with the Canadian Space Agency